Chelny puppeteers were participants of the VI International festival of young producers "Craft". The festival took place at several venues, Kazan from 15 to 22 December 2014. It was attended by Directors from Vilnius, Almetyevsk, Kazan, Naberezhnye Chelny and Tuimazy. Only the poster of the "craft" was presented on 12 plays and 4 theatrical sketch in the Tatar and Russian languages.

Puppet brought to the festival, perhaps his most unusual spectacle. It's "the Hedgehog and the fog of Latvia Director of the Carolina Garnite. Audio-tactile 5D show for the blind and visually impaired children - the first production in the Republic of Tatarstan, designed specifically for children with disabilities vision. Interesting show in that it is not only unusual action, but special means of rehabilitation "special" children.

For participation in the festival with a performance of "the Hedgehog and the fog" from tales of Sergei Kozlov, Director of the Carolina Garnite awarded a diplom. 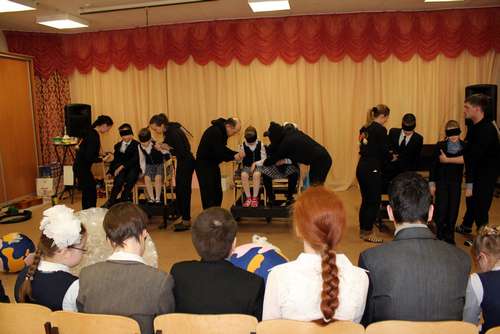 Participants sit on a special seat